This year the 13th Debian Conference (DebConf) is going to happen for the first time in Central America. From 8th to 14th of July 2012 developers and contributors of the universal operating system from all over the world are heading to Managua, Nicaragua. Last year’s DebConf hosted in Bosnia-Herzegovina had over 350 attendees from 46 countries.

DebConf is the annual convention of Debian Developers and contributors, who all want to help to make it better. Debconf is held each year in a different country, normally not on the same continent two years in a row.

The event enables exchange of experience and knowledge transfer between individuals involved in the project. Proposals of ideas and mechanisms, new strategies and discussions about different topics can be treated in order to make right decisions and encourage more people to get involved with certain areas of Debian’s development.

The week before DebConf, at the DebCamp, many developers come together to get their hands on working together on special sub projects of Debian. 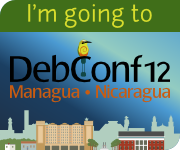 All together leads to improving the operating system Debian, which benefits all users of Debian (and derivative distributions, such as Ubuntu, LinuxMint, etc.) and on a bigger picture, GNU/Linux en general.

Part of the event is the DebianDay (7th of July), when the DebConf is open, for one day, to the public and everybody can learn about Free Software, Linux and Debian. Talks on this day are going to be on a more introductory level and some in Spanish language. We will provide a big and nice event, publicly announced with a lot of participation of Central Americans, who want to get some flair of Debian and Free Software developers.